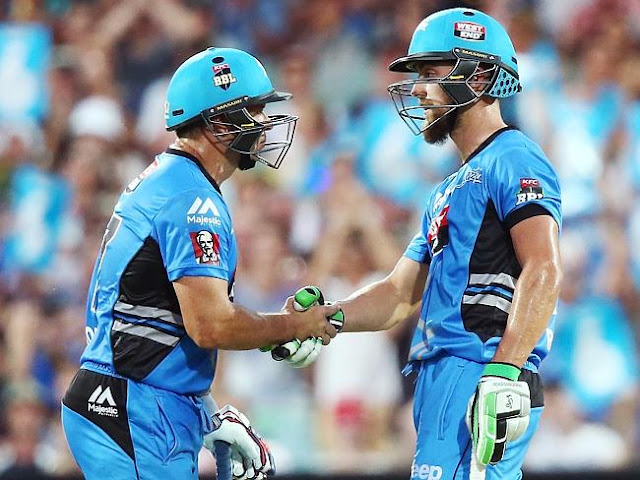 The Strikers struck early in the competition, taking down the highly fancied Stars team with what appeared to be a minimum of fuss.

It wasn't all plain sailed being 4/66 off ten overs, but another old boy Brad Hodge fired away to score 56 off 41 balls, while the up-and-coming star of Australian cricket Alex Ross pounded and swept his way to 65 off just 31 deliveries, to be the mainstay of the Strikers eventual total of 5/187.

The Stars innings was almost comical, as five catches were put down in the first half a dozen overs, four of them alone by keeper Tim Ludeman, and four of them also off the bowling of Kane Richardson, whose mood grew darker with each failing.
At 1/90 off 11 overs the Stars appeared to be cruising, but finally things started to turn for the Strikers. Ben Laughlin and Adil Rashid cleaned up the first four batsmen, helped by Luke Wright standing on his stumps, and Kevin Pietersen and Glen Maxwell playing equally ill-though-out shots in a pressure situation. Richardson returned to clean up the middle order, and finished with 3/22 off his four overs (which could have been anything). The Stars petered out to 7/168 and with some questions still to be answered of their superstar team.

Email ThisBlogThis!Share to TwitterShare to FacebookShare to Pinterest
Labels: 2015/16 BBL05