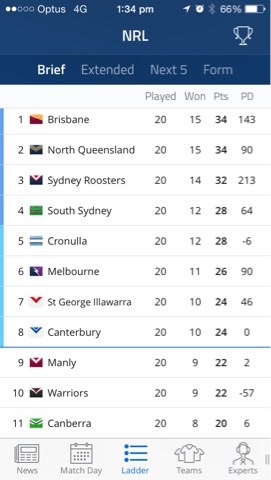 As with the AFL with just four rounds to go, the top eight looks to be in a solid position, with only the final order of the teams to be determined, and a possible late challenge from Manly-Warringah to try and crash the finals party.

Three teams are still a chance to be crowned as minor premiers, with the possible repeat of last season where the Roosters won the title on for-and-against. Brisbane play Dragons at home, Roosters away, Rabbitohs away and Melbourne at home. North Queensland play Rabbitohs at home, Warriors away, Melbourne away and Gold Coast at home. Roosters play Parramatta at home, Brisbane at home, Manly away and Rabbitohs at home. None of those draws are easy, and it is hard to see any of those three teams winning all four games to ensure a minor premiership. The Roosters have the far superior percentage, but are a game behind the two Queensland teams, but also have three of those games at home. Home ground advantage for the finals goes to the top two teams, with the real possibility season front runners Brisbane could be squeezed out over the closing rounds. or perhaps that is just wishful thinking.

The final spot in the top four should go to the Rabbitohs, but it isn't a foregone conclusion. Rabbitohs play North Queensland away, Bulldogs at home, Brisbane at home and Roosters away. Cronulla play Melbourne at home, Tigers at home, Parramatta away and Manly at home. Melbourne play Cronulla away, Knights at home, North Queensland at home and Brisbane away. If percentage comes into play, then the Storm will slip in by the skin of their teeth. If Cronulla can best Melbourne this weekend, they then have the Tigers and the Eels following that, which may well play into their hands perfectly.

To make the final eight, Manly would have to win all four of their final games against Canberra (away), Parramatta (home), Roosters (home) and Cronulla (away), which is not an impossible task but a tough one. At this stage you would expect both the Dragons and Bulldogs to win three of their last four to cement their spots. Dragons play Brisbane (away), Penrith (home), Gold Coast (away) and Wests Tigers (home), while Bulldogs take on Gold Coast (home), Rabbitohs (away), Newcastle (away) and Warriors (home). Manly's best chance is for the Dragons to drop two of those games (a possibility) and for themselves to win three of their last four, with a high boost in their for-and-against (a possibility).