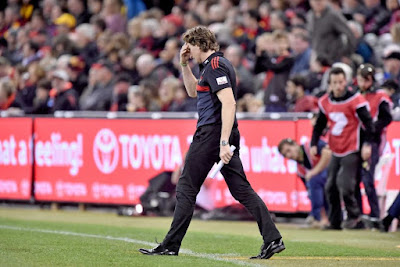 On a day when the AFL announced the richest TV deal in the history of Australian sport - $2.5 billion if you don't mind - the Essendon football club finally took the decision that should have been made over two years ago, when it announced that James Hird was no longer the senior coach of the club. It should have gone further, but these things never go as far as they should when they should.
At the press conference, the two quotes that amused me the most were the following:

James Hird: "Club Chairman Paul Little and I agreed the club would never be free of the ASADA saga as long as I was head coach".

Paul Little: "The outcome will provide the players and the club the benefit of a fresh start and a clean slate".

Well, tally-ho boys, jolly good show and pip-pip for good thinking. No one would ever have thought of that.

Said no one ever.

There was some rubbish that came out of that press conference yesterday, and no doubt we were all meant to believe every single word.

Seriously. James Hird's statement was certainly true, but it was true two years ago as well, when Hird refused to step down as coach and Little and his board instead gave him a year's paid holiday away from the club in the hope everything could be resolved and/or swept under the carpet. The fact that nothing has changed in any respect to do with the WADA investigation really means that the removal of Hird from the coaching position cannot be related to that - if in fact Hird resigned and was not sacked as they would have us believe. From everything that has happened over this time period, it appears unlikely that Hird finally conceded and resigned, having gone so long refusing to do so. Surely he was sacked, but took the offer of 'resigning' to keep the face of the club clean.

The players may well feel for Hird, and may well have wanted him to stay on as coach. They may have felt that he was the one man who was standing up for them and fighting for their position and future over the ASADA and then WADA investigations. All of those things may be true, but they miss the point of the initial breaking of this story so long ago. The point is that Hird had a Duty Of Car to the players, and that simply didn't happen under his watch, and he therefore had to be held accountable. It has taken two and a half years to have that acted upon.

Little should also have resigned yesterday, and completed the rout. The board's handling of this almost from day one has been abysmal, and not without some justification given the enormous circumstances and difficulty in dealing with individuals involved and how to approach a guilty or not guilty verdict in the long term. But tougher decisions needed to be made well before this point in time, and that has been observed all the way through, not just with hindsight. This day was always going to arrive, and the longer it has taken, the longer this has dragged on.

It won't be over yet, until WADA brings down its verdict, but the Essendon club could not afford to go into 2016 with the same people in charge of its team and risk losing yet another season to the mire of the drugs scandal, of which rightly or wrongly James Hird has been the face of. Both Hird and Little were correct in their statements, but it was the three lost seasons caused by their delay that has brought this to a head to day in order to save the future seasons.
Posted by Bill Peters at 7:30 PM