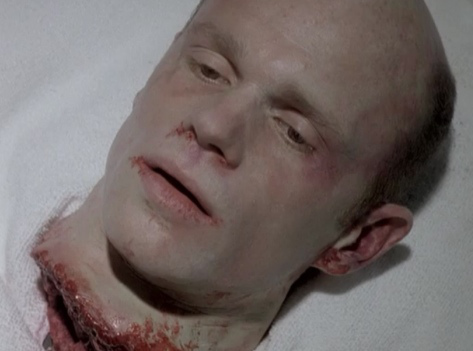 OK, now we have a chance to get back into the swing of things. A person being decapitated in an accident, and then the body not only escaping from the morgue, but regenerating a new head? Yep, there's something here for everyone.

A guy who subsists on cancerous growths - that's great. But does he have to kill people for that? Well, it would be less fun if he didn't I guess. The fact that he loses limbs and then regrows them is cool - when he regenerates a whole new body, that's impressive. The conclusion of the episode, where the revelation is revealed that forms part of the story arc for the next one and a half seasons also puts an exclamation mark on the episode. 4.5/5
Posted by Bill Peters at 3:14 PM