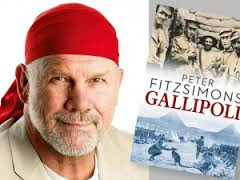 I finally managed to get through to the end of this book this evening. It felt like it took the length of the Gallipoli campaign to read it, but in the end it took a little under two months. But that's what happens when you only have a period of between 15-30 minutes every night before you go to sleep to read. 700+ pages is quite a trip.

It was another excellent read from FitzSimons, whose style of writing is only exceeded by the amazing research he and his team achieve. Most of the story from the landing at Anzac Cove on April 25, 1915 through to the evacuation of the peninsula I knew already in one shape or form, which didn't make it any less interesting to read again. However, a lot of what he wrote about the lead up to that initial insertion was information that I didn't know very well, especially the conferences of the war cabinet in England. It was terrific stuff.

So I can finally put 1915 to bed, and move on to my next book. Hopefully something that i can get through a bit faster.
Posted by Bill Peters at 10:30 PM

Email ThisBlogThis!Share to TwitterShare to FacebookShare to Pinterest
Labels: Books