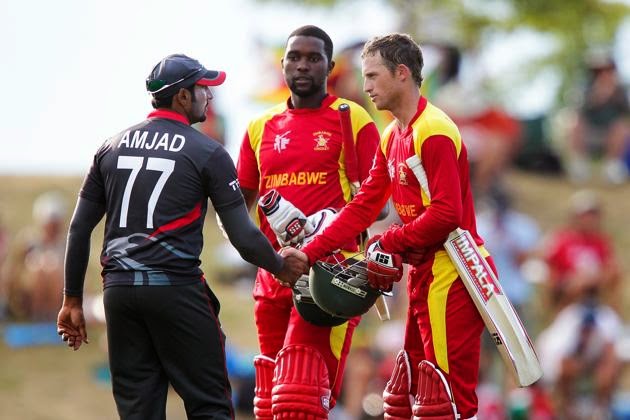 Today's match proved to be a closer and harder-fought event than most would have believed, and revealed a little bit more about the international teams that can be considered the second tier. Whereas both of these teams have some handy players, and skill with bat and ball, they are missing some vital abilities which set them apart from the higher ranked teams.
Zimbabwe won the toss, and... yes, you guessed it... decided to field first. While this may have helped even up the score of win ratio when sending the opposition in, it was a bit shaky at times. The United Arab Emirates actually batted very well, and had moved to 4/156 after 35 overs. The loss of their top order however looked as though it would inhibit their ability to put on a defendable total. Not so! cried the masses, and in the final 15 overs the U.A.E managed to slash and slog 129 runs, and finish up at 7/285 from 50 overs, their highest total in an ODI.
Despite the big total, it never felt like it would be enough. Consistent wicket losses by Zimbabwe made the chase tough, yet it was obvious that U.A.E had to bowl Zimbabwe out if they were to pull off the victory, and a sensible sixth wicket partnership from Sean Williams and Craig Ervine shored up the wobbling ship. Three wides, and 17 runs in total from the 41st over by Naveed got the chase below a run a ball, and Williams, Ervine and Chigumbura got their team home with two overs to spare.

So what are those vital abilities missing, as mentioned at the top of the article? Well, you already know them, as do the teams in question. They need two or three real match-winners - those players that can score big and quickly when needed, but rebuild when necessary, or get the big wickets when necessary, but can contain the opposition if need be. And, in particular, the level of fielding has to improve. Teams must take all of those catches that should be taken at this level, and even snare a few that no one should catch. The general ground fielding in particular is where it is most noticeable. It would be an interesting exercise to note how much misfields and dropped catches cost these teams in regards to extra runs and sundries, because it would be quite a bit. In a match such as this, where the teams are evenly matched in ability, my guess is that those errors even out between the two sides. Unfortunately, when you take on the better teams, these things are the ones that will cost you the most. The coaches of these teams know this, and it will be why they are (hopefully) working so hard on making sure their fielding improves to the point where they are watertight on the paddock.

Zimbabwe will be pleased with their win, and will now be looking forward to their matches against the West Indies and Ireland, which they must win if they want to make the quarter final stage of the tournament. For the U.A.E, their best chance of winning a game has now passed, but their progress will be interesting to watch over the next couple of weeks.
Posted by Bill Peters at 7:30 PM