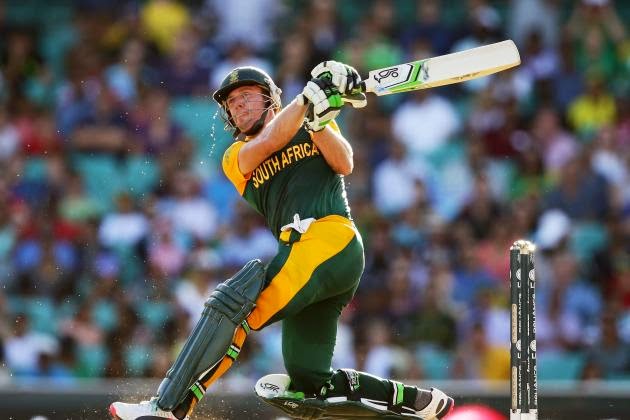 If the West Indies don't play against South Africa for the next decade, they will still have nightmares about AB de Villiers and his destructive intent. After receiving their fair share of thrashings in South Africa a month ago, it was more of the same on the world stage today in Sydney. Whether or not this reveals any more for the latter stages of the tournament however is still up in the air.

For a start, the Windies bowled well. Only 31 runs came from the first 10 overs, and even at the halfway mark, the score was 1/112. The lack of wickets was a concern, but the Windies must have thought that 300 would be a maximum chase, given Sydney was at best a 280 wicket historically. Then they struck gold in the 30th over, dismissing both set batsmen du Plessis and Amla. at 3/147 after 30, one more wicket had the Windies in a terrific position.

Lightning does apparently strike twice, as de Villiers made a mess of the Windies bowling attack again. He was assisted admirably by Rilee Rossouw, who set the scene with his innings of 61 off 39 deliveries, which allowed AB to ease into his innings. By the time Rossouw departed AB was on his way, willing the Windies bowlers to bowl where he wanted the to, and just destroying them. Skipper Jason Holder had started with five overs for just nine runs. His final two overs alone, the 48th (34) and 50th (30) went for 64 runs, and in all 95 runs came from his final five overs. de Villiers finished with 162 runs off 66 deliveries. South Africa scored 261 runs from the final 20 overs, 150 from the last ten overs. Their total of 5/408 was another uniquely familiar number on the S.C.G. from recent months.

It was brutal. Was it avoidable? Again the bowling appeared rather plan-less, but such is the regularity that de Villiers plays this type of innings you can only wonder. The fact his two most recent efforts have been against a waning West Indies attack may have something to do with it, and his ability to do so against more potent attacks will be monitored. It was spectacular viewing for those in attendance or watching on TV.

The Windies reply was predictable. Having been praised and feted for the days since their record partnership against the heavyweights of Zimbabwe, Gayle and Samuels both fell in the first three overs, Gayle backing away and exposing all stumps for 3, and Samuels edging behind for a duck. No building an innings here, and swinging the bat late. This task was too tough, and a good one to get away from early. A much better evaluation of those batsmen than the plaudits they received against an inferior bowling attack. Simmons, Sammy and Russell, the sloggers who have so far come off for the Windies late in the innings, contributed five runs between them, all victims of Imran Tahir, who finished with 5/45 from ten overs. Their final total of 151 flattered their batting efforts, and the record defeat of 257 runs again better illustrated where they currently sit in the scheme of world cricket than their previous game had.

With four points from four games, the Windies are still walking a finals tightrope. They have games against India next Friday and U.A.E the following week to force their way into a finals spot. It is not yet assured that they will be there. South Africa have games against Ireland, Pakistan and U.A.E to complete their initial rounds, which should see them finish either first or second in Group B depending on whether India can hold their unbeaten streak together.
Posted by Bill Peters at 10:00 PM