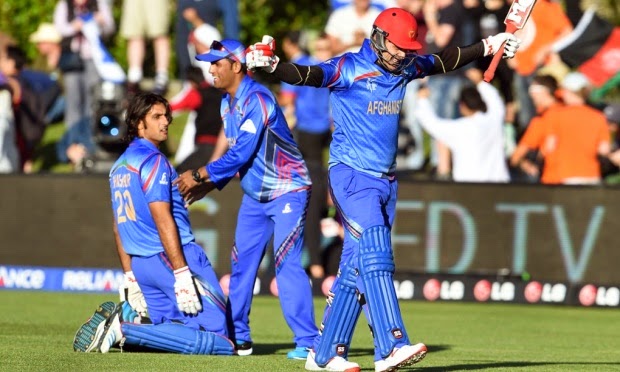 This World Cup is starting to do my head in. You have to wonder how the same things seem to keep happening again and again and again. It makes for fascinating viewing, and the respect for the fighting qualities of all of the Associate nations here increases with every day. The joy of victory, and heartbreak of defeat, will not be felt more in the eventual final of this tournament, as it was felt in yesterday's match between Ireland and U.A.E, or in this match today, where both teams were battling for their first ever victory in a World Cup match.

Afghanistan won the toss, and as appears epidemic in this Cup, decided to send Scotland in to bat. Four times during this match the positivity or negativity of this decision changed 180 degrees. The Afghani's bowling attack looks more impressive each time they play, with Shapoor Zadran, Dawlat Zadran and Hamid Hassan bowling quite superbly, with good pace at times, and for the most part a great line and length. Their accuracy continued to knock over Scottish batsmen at key moments. Coetzer, Mommsen, Machan and Berrington all made starts, but once again failed to go on with it and make a big score. It has been Scotland's problem, never having totalled over 186 in a World Cup game. And, at 8/144 after 37 overs, it wasn't going to happen here either.
But of course, that is where this World Cup is so different. Scotland's ninth wicket pair of Haq and Evans didn't throw their wickets away, and batted sensibly, getting runs where they could. Suddenly, the pitch went from a minefield to a belter, and the bowlers just couldn't break through. Their excellent partnership of 62 runs off 75 balls defied the efforts of their more established higher order, and showed that determination can succeed in any situation. Haq made 31, and Evans was dismissed from the final ball of the 50th over for 28, and remarkably Scotland has made 210, their highest total in a World Cup game, and at least something for their bowlers to defend (given two of them had made most of the runs).

Afghanistan started the chase like a shot, with Javed Ahmadi looking like he has somewhere else to be. After racing to 0/40 off 7 overs, two wickets in four balls halted that momentum. Ahmadi and Samiullah Shenwari steadied the ship, with Ahmadi bringing up a very classy 50, until a calamitous six overs saw Afghanistan lose 5/12, and thus the match. At 7/97 off 24 overs, though the rate required was reasonably comfortable still, there was no way the Afghani's could manoeuvre their way to a winning score. Even an 8th wicket partnership of 35, to take the score to 8/132, was not enough to raise hopes.
And yet... somehow... a second 9th wicket partnership for the match produced a nail biter. Shenwari looked impenetrable, unperturbed, invincible. He managed the strike, happy not to take long singles unless necessary. In support he had the impressive Hamid Hassan - obviously not a batsman at all, but a damn good fighter who doesn't like to give up. He blocked, he left, and let his senior partner decide which balls to hit, and which to take a single from. It was tense stuff, for both teams. Just when one seemed to be taking control, the other fought back.
Four overs to go, and Afghanistan needed 38 runs off 24 balls. The off spinner Haq bowling to Shenwari, and this was the over where it had to happen. And it did - for both sides!

46.1
Haq to Samiullah Shenwari, SIX, it's flat and it sits up for a magnificent mow over cow corner. Shenwari has skipped down the track and is playing the innings of his life

46.2
Haq to Samiullah Shenwari, 1 wide, runs down the track and Haq drifts it down the leg side. The sweep misses, but he gets the wide

46.2
Haq to Samiullah Shenwari, SIX, another length ball sliding down leg and Shenwari has hammered another six. Nabi roars in the dressing room, Shenwari points at the bottom of the bat and indicates he has mistimed it. That's the fifty partnership for the ninth wicket!

46.3
Haq to Samiullah Shenwari, no run, fired into the block hole and its been blocked

46.4
Haq to Samiullah Shenwari, SIX, flighted into the slot and Shenwari has launched it over the square leg boundary and sinks onto his knees again. He's 96 not out and he's got every scenario rolling in his head. Will the pressure be too much? Its only 19 off 20

46.5
Haq to Samiullah Shenwari, OUT, length ball on middle and Shenwari has picked out deep midwicket! Haq goes mad, Shenwari is on his knees in despair! What an innings! What a performance! What passion! And spare a thought for Davey on the boundary, who kept calm and pouched a good, pressure catch. But wait... the third umpire is asking him to wait. He's checking if Scotland have adhered to the field restrictions. You're allowed four outside the circle. How many did Scotland have? They had the right people and Shenwari has to walk and he does so while counting the men on the deep in his mind
Samiullah Shenwari c Davey b Haq 96 (176m 147b 7x4 5x6) SR: 65.30

So now the last pair is at the crease, and they need 19 runs off 19 balls. Surely... SURELY... Scotland can hold on. Well, as the record shows, this wonderful match went to the final over, and a boundary from Shapoor Zadran off the fourth last delivery sealed the victory for Afghanistan. It was a terrific match again, as have all of the matches between the lesser lights of the competition.

Afghanistan will now wait until Wednesday, when they have a date with Australia at the W.A.C.A, a match that will no doubt excite their bowlers, but perhaps not their batsmen. Scotland will now have to try and pick themselves up for their match with Bangladesh next Thursday, in the hope they can break their World Cup duck.
Posted by Bill Peters at 6:00 PM