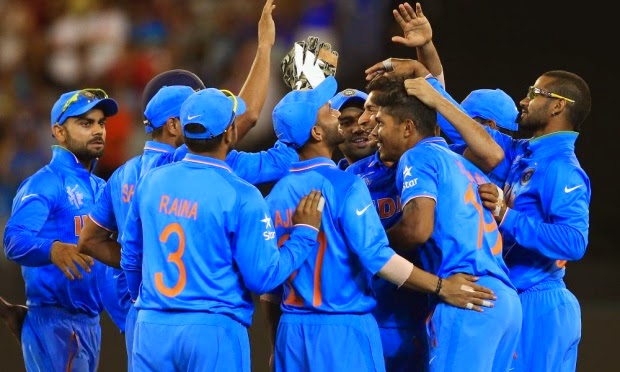 This summer in Australia, the Indian cricket team has rarely appeared likely to win a game of cricket. Sure, they have had their moments, but overall they have been unable to put it all together when the chips have been down. Last weekend they won well against Pakistan to kick start their World Cup campaign. Today, the sun shone in their direction and barely abated. MS Dhoni won the toss, and elected to bat on a true MCG surface. The 86,000 strong crowd was well and truly in India's favour, cheering madly for every run. One of South Africa's spearheads, Vernon Philander, broke down after four overs, meaning that AB de Villiers had to find six overs from other part-timers, while Wayne Parnell was feasted upon by the Indian batsmen. Add to this that South Africa dropped catches that rarely trouble them, and it was almost a perfect storm.

There is no one in international cricket who considers taking a single to AB de Villiers. Well, Dhawan and Rohit Sharma thought about it, and it led to Sharma being run out for a duck. Ridiculous. Even if they had both gone straight away, one of them would have been out by half a pitch. Still, apart from this, India progressed soundly. Dhawan played his best innings in 18 months, while Kohli built his innings. Dhawan was dropped in the gully by Amla just after he passed fifty, a planned dismissal as de Villiers had just moved him into that position. It was to prove costly, as he was eventually dismissed for 137. Kohli and Rahane provided great support, and at 2/261 India should have pushed on to somewhere near 350, so that the eventual total of 7/307 should have been a disappointment to them, and despite the travails they had faced South Africa would have thought themselves still a chance.

It was false hope though, as their batsmen faltered under the excellent spells from Mohammed Shami and Mohit Sharma, who exploited the conditions wonderfully well, bowling much better and faster than their more highly fancied opponents. de Kock again failed to impress, while the dismissal of Amla, and the run outs of de Villiers and Miller had this game out of reach at a very early stage. Ashwin and Jadeja then did the job expected of them after the fast bowlers had made the early break throughs, and they final victory margin of 130 runs was as surprising as it was enormous.

After four months, India appear to have their formula for the tournament. The batsmen look good, apart from Raina, who will no doubt receive a barrage of bouncers for the remainder of the tournament such is his aversion to them. Their pace attack of Umesh Yadav, Shami and Mohit look to be one of the best attacks now, especially given India have two games to play at the W.A.C.A. Ashwin and Jadeja will be the spin support. There is now every chance India will finish first in Group B - and who would have said that a week ago? It's a long time in international cricket. South Africa was pushed by Zimbabwe, and has now lost to India in their first two matches. Their woes on Australian wickets continues, and finding a number seven batsman and fifth bowler is also proving to be a problem. Add to this that South Africa was fined for their slow over-rate, which means another infringement will mean AB de Villiers will be suspended for a match. All in all, if you look at how these teams were travelling at about 9.00am last Sunday, and how they look a week later, you could not be any further apart.
Posted by Bill Peters at 11:00 PM