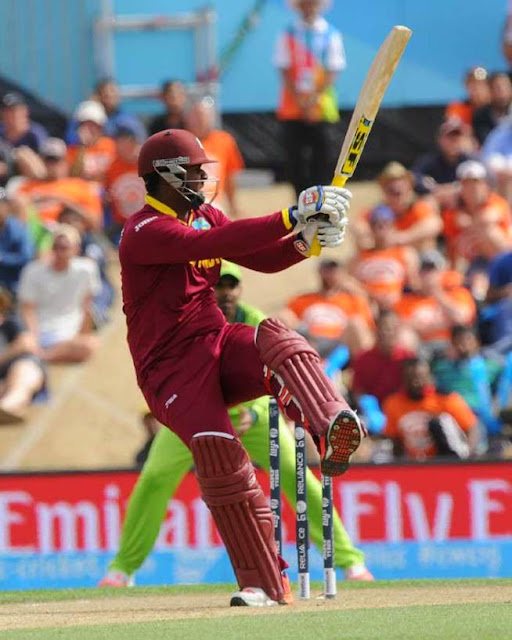 The two most unpredictable teams in cricket came together to see if any clarity could be made on their chances of making the knockout stage of this tournament. By the end one team had tasted victory, but the question probably still remains unanswered.

Pakistan decided to forego the advantage of winning the toss by electing to field, though this was not the end result in their eventual defeat. The early wickets of Gayle and Smith were not surprising, these two under-performing gentlemen have made a habit of ditching their wicket too quickly. The Pakistan bowlers bowled well, and didn't enjoy a lot of luck. Once again they contributed to their own misery. Umar Akmal added to the tally of sitters that he and his brothers have dropped when wicket-keepers for their country. The enormity of the missed chances over the years by Kamran and then Umar is incalculable. Shahid Afridi had a shocker, dropping two sitters himself that also could have changed the course of the match. Even with these taken into account, The Windies were 4/194 off 40 when Ramdin was dismissed, and with Darren Bravo retired hurt, good bowling and fielding would have meant no more than a target of 270 should be the aim.

To complete compound the errors of their last ten overs of the West Indies innings, Pakistan sealed their fate with the first 19 deliveries of their own innings. By this point, they had lost four wickets for only one run scored, the worst start in International one day cricket history. Even the reliable veterans Younis Khan (golden duck) and Misbah-ul-Haq (7 off 21) could not withstand the debacle. At 5/25 off ten overs, only a miracle or Shahid Afridi could save this match. Fifties to Maqsood and Akmal delayed the inevitable, but Pakistan were eventually routed for 160, taken apart by the same fast, short-pitched bowling from the West Indies that had ironically cost them their match against Ireland a few days beforehand.

What were the lessons to be taken from this match? For the Windies, you can be certain that their future opponents will be talking very seriously about how to bowl to their middle-late order hitters who have been so effective in both of their matches so far. They will also know that the Windies game plan with the ball will be to bounce teams out. Pakistan's paper-thin batting is becoming a real problem for them, along with their capacity for dropped catches. No one truly believes either of these teams can win the World Cup - one wonders if they believe it themselves. For now, they are both still fighting just to make the next stage of the competition, and to do so they will both need to improve markedly over the next couple of weeks.
Posted by Bill Peters at 5:30 PM