Ross had departed by the time the rest of us had risen, and it was time to start thinking about how we would attack the day ahead. Time to slip into the Day Two uniform. 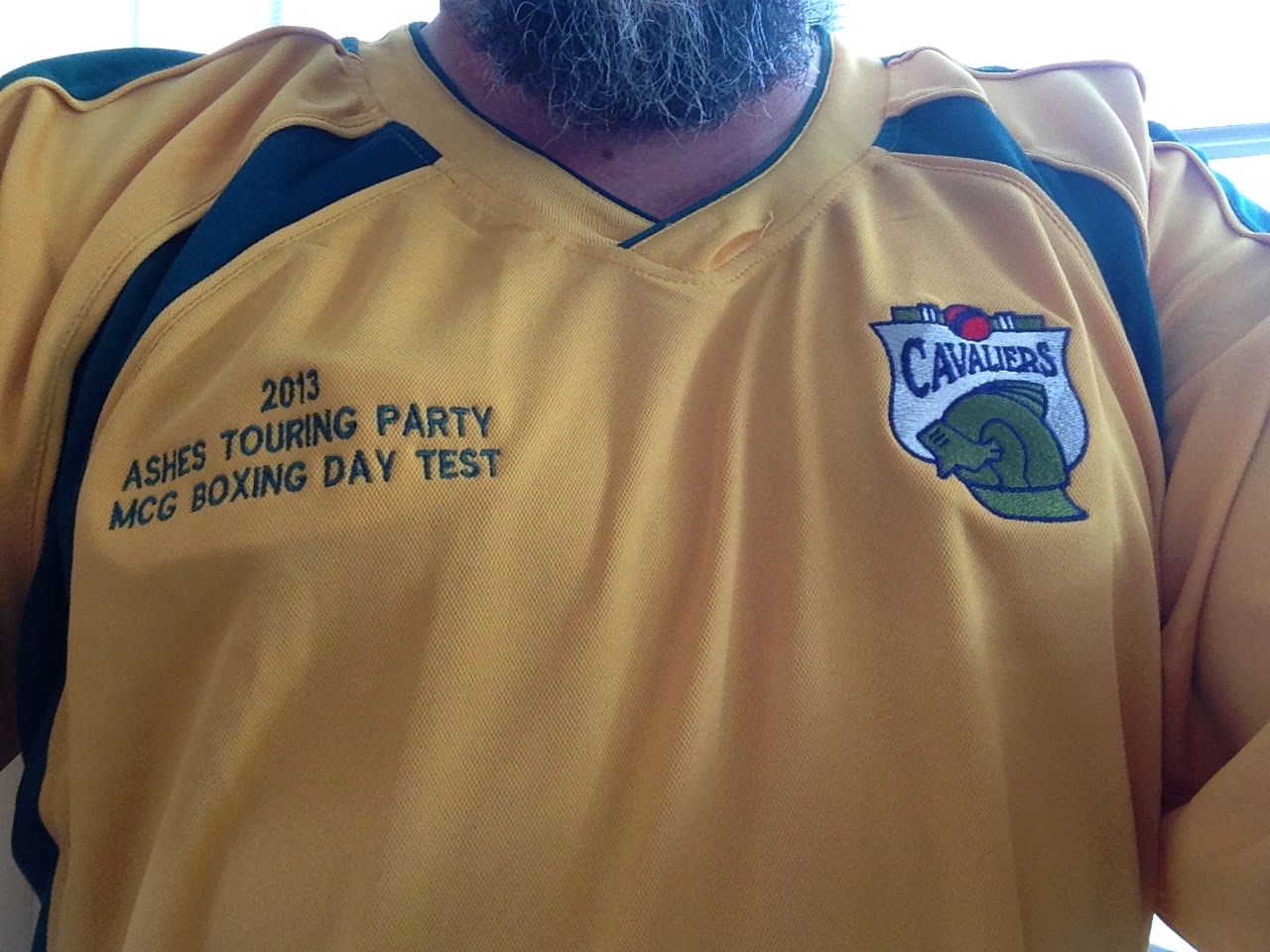 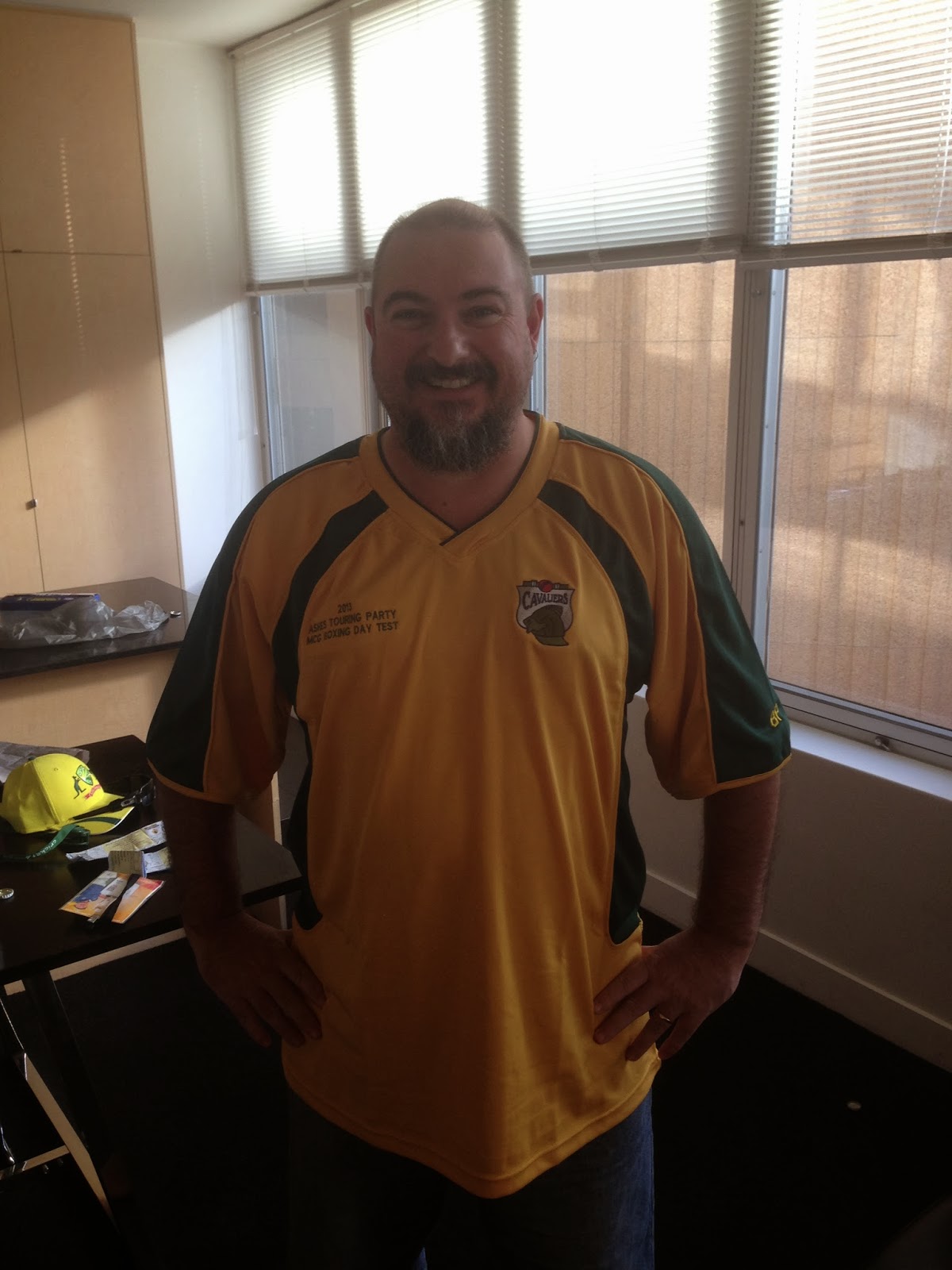 We sensibly made the decision to take in breakfast this morning, and so another roundabout route from our fearless leader saw us down a dark alleyway to another of his favourite haunts... only to find they had no power. We backtracked two store frontages instead and partook eggs and bacon with two cups of coffee to get that heart started.
When we arrived at the G, we found the stall where Jason had been the day before, where you could get a photo with the ICC World Cup, the tournament which is taking place in Australia in early 2015. Having convinced the guys there that the four of us could fit (a tight squeeze to be sure) we had the following photo taken to keep forever of our trip. 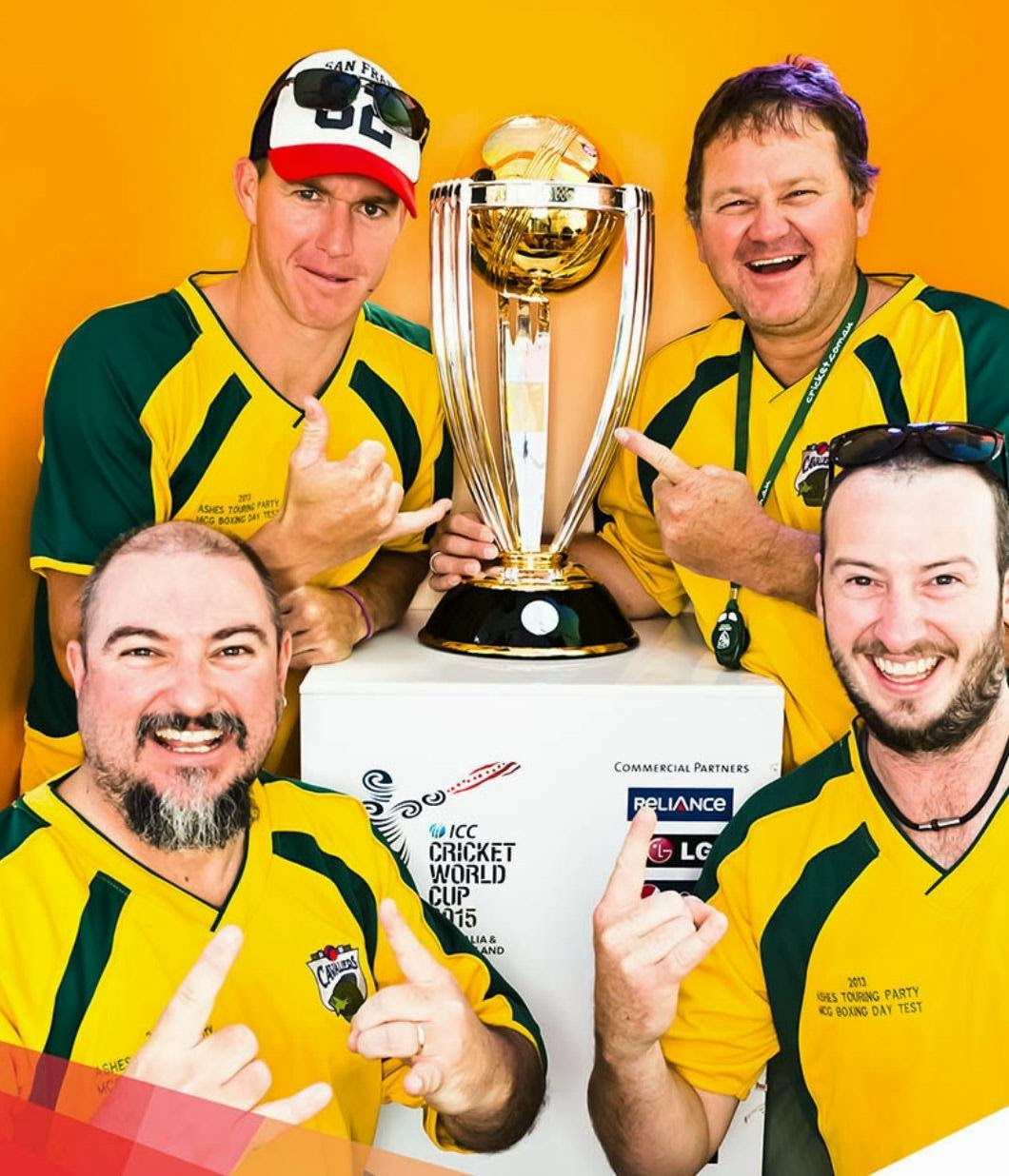 Back into the stadium, and today we were at Ground Zero, second row off the fence and right in the lions den. Great seats again, Jase. 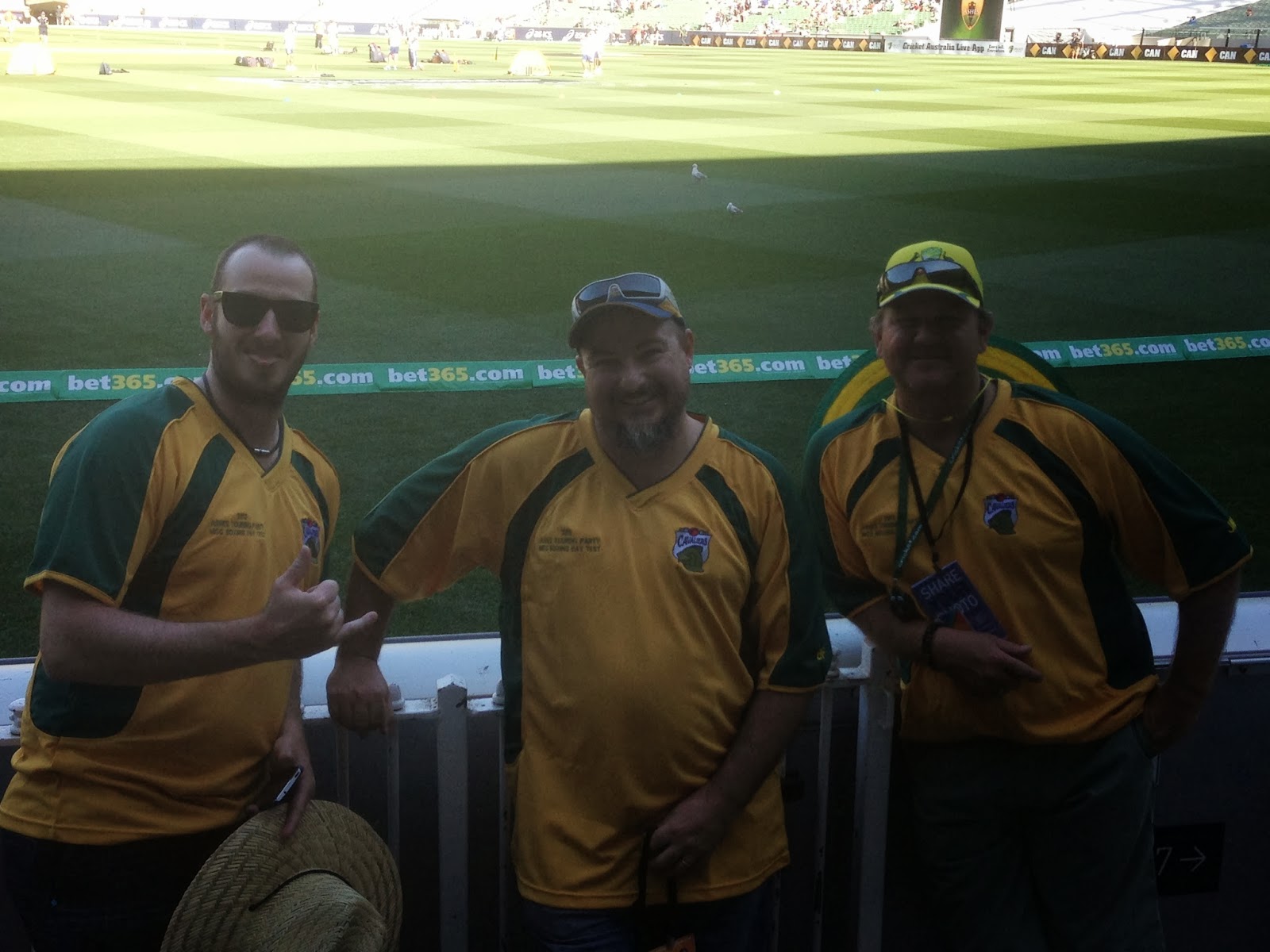 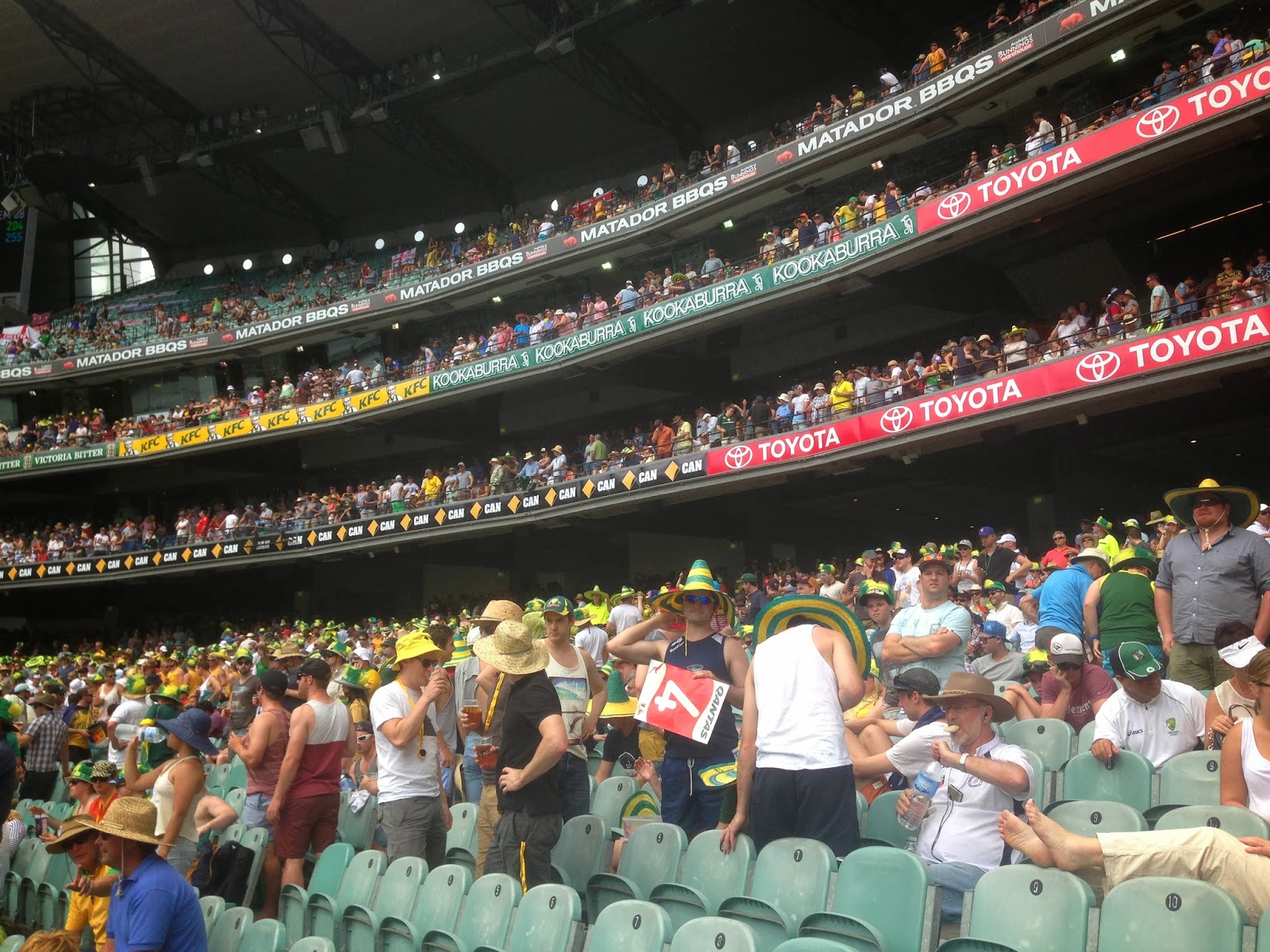 We had better company today, but perhaps mainly because the cricket turned our way.

In front of us, in row 1 seat 1, was an old bloke we dubbed "Skip". He told us the story of how he had a mate who was unwell and not capable of travelling on his lonesome, but who wanted to travel and see world sporting events. He ended up convincing Skip to go with him on the recent Ashes tour of England on the ASC hosted tour. Then, two days before they left, Skip's mate passed away. Obviously he didn't want to go, but his mate's wife convinced him to go on the tour anyway (missing his mate's funeral in the process). Then, a couple of weeks ago, his mate's wife rang him up, and told him that, before he moved on, his mate had bought himself and Skip tickets to every day of the Melbourne Test, just to show his appreciation for going with him to England. Wow. How do you take that? So here was Skip, at the M.C.G in seats bought by his dead mate, and having a great time. A wonderful story. I think he had a great day with us, joining in our catcalls and comments, and each time he did he was encouraged further by both Jason and Sam.

Next to Skip turned up a couple and their mate. The bloke and his mate were both Poms, and his wife was Australian. Both the blokes were in the England shirts with their Union jack flags at the ready for any chance to cheer their team on. We all mentioned how we thought his wife should be standing up to these two dressed up Poms. An hour later she went off to get some beer, but she did seem to be taking a while (which of course was mentioned by us - "has she gone home?!"). Some time after she returned with the beer - as well as now being completely decked out in the Australian green and gold shirt, Australian cap and waving an Australian flag. She got a great cheer from us. And of course, as the day wore on, and Australia reasserted their dominance, it was she who was loudly enjoying herself, while her husband became quite muted.

By lunch it was a devastating scenario. For a start, the forecast maximum was 39 degrees, and whereas yesterday we had been crying out for the shadow of the stands to be lifted from us so we could warm up, today we were dreading it. When the sun hit us at 11.00am the temperature rose about 15 degrees. Madness. Also, despite Haddin and Lyon adding 40 for the last wicket, England still had a lead of 51 on the first innings, and at lunch they were 0/54 in their second innings, though Carberry had done little to effect that by crawling to 5 not out off 50 balls. Effectively the Poms were 0/105, and I mentioned to Sam that if something didn't happen quickly after lunch it could be a long two days for us.

It took until five over after lunch for the breakthrough to come, with Mitch getting through Cook, who had made pretty much all of England's runs. At 1/65, with England 116 runs in front, it was the beginning of two very satisfying sessions of cricket to be at the ground, watching it all live. Either side of drinks three wickets fell in six balls to bring the crowd to life. Carberry was finally executed for 12 off 81 balls, before Joe Root ran himself out by hitting the ball straight to Mitch at Mid off and he threw down the stumps at the bowlers end. Pietersen took a single before Bell chipped his first ball to Mitch again at mid-off, and he was out for a golden duck. Just beautiful. Does it get any better than seeing Bell get a golden duck?... and with the score on 87...

England lasted until tea with no further damage, which brought The Wave out in force, which comes across pretty well in the video below. There is also a little chat by Jason and Sam to resident deep mid-wicket George Bailey at the end.

After tea it was getting hotter, but not as hot as it was for England. From 5/173 they collapsed in the final session to be all out for 179 in a rollicking exhibition where the crowd really came to life. Broad's dismissal for a third ball duck and Pietersen trying to hit his way to heroism and falling to a great outfield catch by Ryan Harris were the absolute highlights, and they were given a massive send of by the Cavalier boys in the Aussie Army. Fantastic stuff. Australia even raced to 0/31 at stumps, and left the tantalising thought that we would see and Australian Test victory tomorrow.


The England innings come to it's conclusion with Monty reviewing a plumb LBW.

Jason and Sam were adamant that a return bout with the casino was a must for the evening, so after our usual wind-down ritual of a couple of beers in front of the BBL, that's where we headed. First point of call was the downstairs eateries, where I picked up tandoori chicken and beef vindaloo with rice and naan bread for just $14.00. That's just ridiculous, and though I have enjoyed everywhere and everything we have eaten on this trip, if I wanted to save $150 I could have had this every night.

Then it was upstairs to the tables once again, and to watch the three players in action (no, I did not gamble one cent at the casino on our stay. I was on a strict budget with our upcoming Queensland holiday, and survived the temptation to have a flutter). I watched as Jason continued his dominance of the Caribbean Stud poker table. I laughed as Rocket seemed to pick it up extremely quickly, and then jagged a few hands that increased his wealth immensely. I laughed harder as Sam decided he wanted in on this, and lost as heavily as Rocket was winning. Then the three of them headed back to High Card Draw, and as Sam slowly fell in a hole, and Jason held his own, Rocket had eight straight winning hands - until the new dealer arrived. The dealer changed his winning chips (which had been sitting on the table throughout his winning streak) and immediately the whole table went down in flames.
While Sam and Jason continued to plough on, Dan and I retreated to the Sports Bar, where a kindly barman, when asked for two scotch & cokes, poured us Johnnie Label Black Label, and only charged $5 each. GOLD!! It was a pity we couldn't track him down again, as the next few rounds were back to house scotch, and at $10 each. Oh well, that first one was savoured I can tell you.
Our arrival back at the room corresponded with 2.15am ticking by on the clock, and so it was to bed to prepare for the final day of the cricket.

Email ThisBlogThis!Share to TwitterShare to FacebookShare to Pinterest
Labels: 2013/14 England in Australia, Two Men on a Cricket Tour