Mark's 40th and the Beginnings of Midnight Cricket

Tonight Helen and I headed off to Mark Yates' 40th birthday party, held at his and Melissa's home in Primbee. Fortunately for all, the gale force weterlies that have been blowing for most of the week had dissapated, leaving a still but chilly August evening for the party.
As the designated driver (and in this day and age, when aren't I?) I spent the evening watching those around me having a very pleasant time along with numerous alcoholic beverages, while I had my two cans, and participated in the toughest cricket ever played. 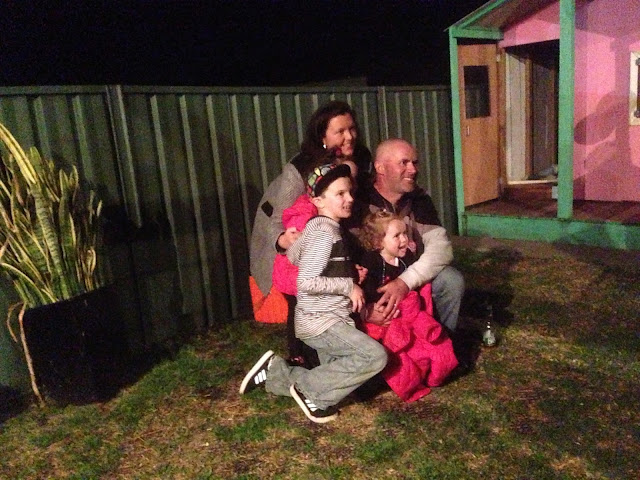 Yes, it's tough cricket. Jack Yates was waiting for me as I walked through the gate. He thrust the bat into my hands, and it was on from 6.30pm. While I was not the only participant, and was not forced to be a constant ingredient, the game (and Jack) was still going when we left at 12.50am. Crazy stuff, or obsessive? Certainly obsessive. There was basically no break, with many of the guests being roped in during the evening.
I can only hope that, before the next event at the Yates household, that they have installed better floodlighting and invested in a white ball, rather than the green ball and then the red ball that was in use that evening, and preferably a ball with a bit of bounce, and not one that runs along the ground.